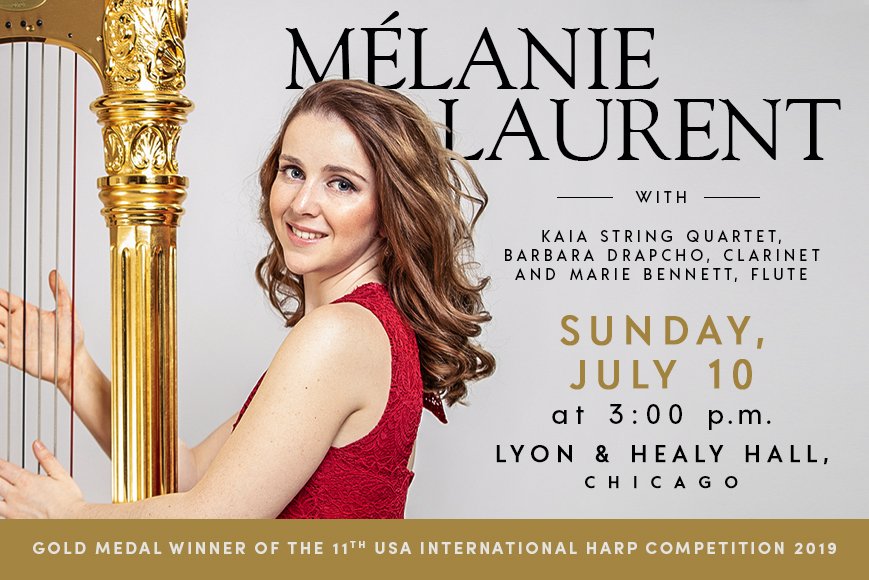 Lyon & Healy Harps has had the great opportunity to support the USA International Harp Competition since its inception in 1989 by presenting the Gold Medalist with a concert grand harp, as well as a debut recital in our Lyon & Healy Hall.  We were pleased to present Mélanie Laurent, Gold Medalist of the 11th USA International Harp Competition 2019.

Program and Performers’ Bios can be found below.

Mélanie was born into a family of professional musicians.  She studied with Isabelle Moretti at the Conservatoire National Supérieur de Musique et de Danse in Paris, graduating with highest honors in 2020. Her playing is now nourished by a thriving multidisciplinary career; she enjoys teaching, performing solo concerts, and working with many orchestras.  These include the Orchestre de l’Opéra National de Paris, the Orchestre National de France, the Orchestre National d’Ile de France, and in venues such as the Berlin Philharmonie, Berlin Konzerthaus, Philharmonie de Paris, Opéra Bastille, Opéra Garnier, and the Théâtre des Champs-Elysées.

As a soloist, she is invited to prestigious festivals in France and all over the world.  Despite many postponements due to the pandemic, she played solo recitals and concertos at the Mito SettembreMusica festival, at the Lago Maggiore festival, at Piano Pic festival, at l’Instrumentarium Paris, among others.  During the summer 2021, she went on a chamber music tour with the famous cellist Gautier Capuçon.  In January 2022, she performed Mozart flute and harp concerto with Joséphine Poncelin and the Orchestre National du Capitole de Toulouse.

Her sensitivity and her “golden touch”, hailed by the Harp Column Magazine, allowed her to win the support of the Banque Populaire Foundation.  She is also supported by the Fonds de Tarrazi, the Meyer Foundation, and the Mécénat Musical Société Générale.

From the tango of the Rio de la Plata to the string quartets of Silvestre Revueltas, the KAIA String Quartet is an ensemble devoted to promoting the rich and colorful music of Latin America. Active performers in both the US and abroad, highlights of the 2019-2020 season include a residency at the Avaloch Farm Institute, a concert tour in Uruguay and Argentina including a performance at Teatro Colón in Buenos Aires, as well as performances at various concert series in North Carolina, Virginia, and Wisconsin.

The Quartet plays an active role in Chicago’s music scene where they are regular guests at the Chicago Latino Music Festival and the Ukrainian Institute of Modern Art. In 2017, KAIA was the first ensemble in residence at Chicago’s classical radio station, WFMT. During this residency they explored the world of Latin classical music with audiences through daily radio segments, performances and broadcasts around the city and the production of KAIA Kids, a series of children’s education videos.

Celebrated by Downbeat magazine for its ability to “beautifully blur the lines between jazz, classical, Latin and world music” KAIA’s album collaboration with Fareed Haque was chosen by Chicago Tribune’s Howard Reich as one of the top ten classical recordings of 2018. Their album, Sureño, explores the music and relationship of Argentinian composers Astor Piazzolla and José Bragato. The latest recording project released in 2020 includes a collaboration with jazz pianist Ryan Cohan in his work Originations. KAIA together with Cohan and his chamber ensemble were featured performing this piece at 2019 Chicago’s Jazz Fest main stage.

KAIA is deeply devoted to music education. From 2013-2017, the quartet traveled to Tijuana, Mexico to present and perform in schools through the sponsorship of the Mainly Mozart Festival. They are teaching artists for Ravinia’s Reach*Teach*Play program and for the International Music Foundation’s Live Music Now program. KAIA is currently in residence at DePaul University’s Community Music Division.

Barbara Drapcho, clarinet, holds both Bachelors and Masters Degrees from Northwestern University. She has studied with Russell Dagon and Charlene Zimmerman at Northwestern, Alan Kay at Manhattan School of Music, and Dr. Dennis Nygren. She is a member of Quintet Attacca, Grand Prize Winner of the Fischoff Chamber Music Competition and Ensemble-in-Residence at the Music Institute of Chicago. As a member of Quintet Attacca, she has performed on New York City’s Schneider Concert Series, Chamber Music Society of Detroit, and numerous Chicagoland series such as NEIU’s Jewel Box, Chicago Philharmonic’s Chamber Players, Rush Hour, Dame Myra Hess, and live broadcasts on WFMT. Her chamber music experience outside of Quintet Attacca includes performances with the Chicago Chamber Musicians, International Chamber Artists, and Milwaukee’s Present Music. Barbara is the former acting principal clarinet of the Rockford Symphony Orchestra and the current principal clarinetist of New Philharmonic. She has performed as a soloist with Chicago Arts Orchestra and is a former member of the Civic Orchestra of Chicago. Barbara has performed with the Chicago Symphony Orchestra, Chicago Opera Theater, and the Northwest Indiana, South Bend, and Elgin Symphony Orchestras.  Barbara is on faculty at the Music Institute of Chicago, North Park University, and Carthage College.

A native of Chicago, Marie holds Bachelors and Masters degrees in flute performance from Northwestern and DePaul Universities. A versatile performer, Marie can be heard on recordings by GIA Publications, performs regularly with regional orchestras such as the Illinois and Rockford Symphony Orchestras, and maintains an active chamber music career. Co-founder of Naperville Chamber Players, she curates a yearly concert series with diverse guest artists spanning the arts spectrum, from harpsichordist, harpist, percussionist, and pianist, to a painter, flamenco dancer, and flamenco guitarist. The ensemble has championed works of contemporary composers, as well as the classical literature. Marie is also a founding member of the MKD Trio, a flute, violin, and cello trio which maintains an active performance schedule throughout the Midwest.

A passionate educator, Marie is on faculty at Elmhurst University, Aurora University, and College of DuPage, where she teaches flute lessons, music theory and jazz history course, and directs flute ensembles. She also maintains a private studio, and frequently adjudicates festivals, competitions, and ILMEA auditions.