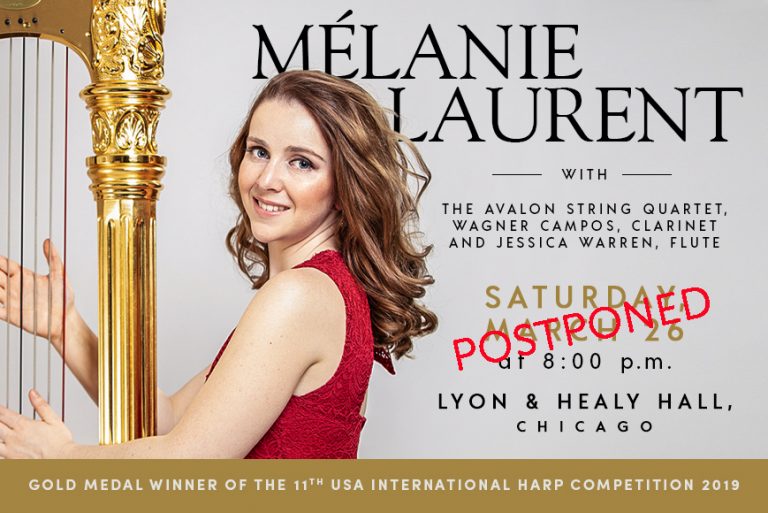 NOTICE: We regret to announce that due to delays in US Visa processing, the concert originally scheduled in March featuring Mélanie Laurent, 2019 USAIHC Gold Medalist, has been postponed to July.  Once a new date and time has been determined, we will notify all those who have already registered and update this page.

Lyon & Healy Harps has had the great opportunity to support the USA International Harp Competition since its inception in 1989 by presenting the Gold Medalist with a concert grand harp, as well as a debut recital in our Lyon & Healy Hall.  We are pleased to present Mélanie Laurent, Gold Medalist of the 11th USA International Harp Competition 2019.

JULY DATE TO BE DETERMINED at Lyon & Healy Hall

Program and Performers’ Bios can be found below.

Mélanie was born into a family of professional musicians.  She studied with Isabelle Moretti at the Conservatoire National Supérieur de Musique et de Danse in Paris, graduating with highest honors in 2020. Her playing is now nourished by a thriving multidisciplinary career; she enjoys teaching, performing solo concerts, and working with many orchestras.  These include the Orchestre de l’Opéra National de Paris, the Orchestre National de France, the Orchestre National d’Ile de France, and in venues such as the Berlin Philharmonie, Berlin Konzerthaus, Philharmonie de Paris, Opéra Bastille, Opéra Garnier, and the Théâtre des Champs-Elysées.

As a soloist, she is invited to prestigious festivals in France and all over the world.  Despite many postponements due to the pandemic, she played solo recitals and concertos at the Mito SettembreMusica festival, at the Lago Maggiore festival, at Piano Pic festival, at l’Instrumentarium Paris, among others.  During the summer 2021, she went on a chamber music tour with the famous cellist Gautier Capuçon.  In January 2022, she performed Mozart flute and harp concerto with Joséphine Poncelin and the Orchestre National du Capitole de Toulouse.

Her sensitivity and her “golden touch”, hailed by the Harp Column Magazine, allowed her to win the support of the Banque Populaire Foundation.  She is also supported by the Fonds de Tarrazi, the Meyer Foundation, and the Mécénat Musical Société Générale.

Described by the Chicago Tribune as “an ensemble that invites you — ears, mind, and spirit — into its music,” the Avalon String Quartet has established itself as one of the country’s leading chamber music ensembles.  The Avalon has performed in major venues including Carnegie Hall, Alice Tully Hall, the 92nd St Y, Merkin Hall, and Bargemusic in New York; the Library of Congress and National Gallery of Art in Washington DC; Wigmore Hall in London; and Herculessaal in Munich.  Other performances include appearances at the Bath International Music Festival, Aldeburgh Festival, Caramoor, La Jolla Chamber Music Society, NPR’s St. Paul Sunday, Isabella Stewart Gardner Museum, Dame Myra Hess Concerts, Los Angeles Music Guild, and the Ravinia Festival.  In previous seasons the quartet performed an annual concert series in Ganz Hall, Chicago, and at historic Fullerton Hall at the Art Institute of Chicago, where it has presented the complete quartet cycles of Beethoven, Bartok, and Brahms.

The Avalon is quartet-in-residence at the Northern Illinois University School of Music, a position formerly held by the Vermeer Quartet.  Additional teaching activities have included the Icicle Creek Chamber Music Institute, Interlochen Advanced Quartet Program, Madeline Island Music Camp, and the Britten-Pears School in England, as well as masterclasses at universities and conservatories throughout the United States.  Additionally, they have given numerous performances and presentations to young audiences in under-resourced schools and communities.

In 2021 the quartet recorded two string quartets of Leo Sowerby for Cedille Records on an album titled “Leo Sowerby: the Paul Whiteman Commissions and Other Early Works.”  In 2018 they released a recording of the complete quartets of Matthew Quayle for Naxos, and recorded “Aqua” by Harold Meltzer for Bridge Records, a recording which received a Grammy nomination for Best Classical Compendium.  They previously released other critically- acclaimed recordings for Cedille Records and Albany Records.  The Avalon String Quartet’s debut CD, Dawn to Dusk, featuring quartets by Ravel and Janacek, was honored with the 2002 Chamber Music America/WQXR Record Award for best chamber music recording.

Wagner Campos serves in the clarinet faculty at DePaul University. Prior to coming to DePaul, he taught at Merit School of Music, Sherwood Conservatory, Lake Forest Academy and the Colombian and Costa Rican Youth Symphony programs.  He has taught master classes in Chicago, Colombia, Costa Rica and Puerto Rico. Wagner had also coached the winds for the Chicago Protégé and Classical Symphonies.  Recently, he was invited to coach the clarinet section of NYO2, National Youth Symphony 2, at Sunny-Purchase, NY.

Wagner is currently a member of Chicago Sinfonietta and Fulcrum Point New Music Project.  He has participated in concerts with the Milwaukee, Alabama, Charleston and New World Symphonies.  He also performs frequently with the Chicago and Philadelphia Orchestras, with whom he has toured and recorded. He has also toured with the Galician Orchestra in Spain.  In 2008, he was invited for one season as principal clarinet for the San Francisco Ballet Orchestra.

At home in Chicago, he enjoys being part of “The Broadway in Chicago” family of musicians, performing shows in the local theaters.  Furthermore, he enjoys playing chamber music with groups such as Fulcrum Point, The Avalon String Quartet and CSO MusicNow, among others.

“Wagner Campos is one of the bright lights of his generation of clarinet performers,” Larry Combs, former principal clarinet of the Chicago Symphony.

A native of Heredia, Costa Rica, Wagner Campos received his musical education at Baylor and DePaul Universities.  His main clarinet teachers include Larry Combs, John Yeh, Richard Shanley and Ricardo Morales.  He participated in master classes given by the legendary clarinetist Robert Marcellus.

Hailed as “remarkable” by the Chicago Tribune and “one to watch, in more ways than one” by Muso Magazine, Jessica Warren has concertized on three continents and appeared as a soloist with the Chicago, Atlanta, Baltimore, Fort Worth, and Omaha Symphonies among others as well as at numerous international music festivals including the Spoleto USA Festival where she gave the American Premiere of Pascal Dusapin’s Flute Concerto, Galim.  She gave her New York recital debut in Carnegie Hall’s Weill Recital Hall in 1998.

She has toured Latin America as an artistic ambassador for the United States, soloing with orchestras and giving recitals to rave reviews.  She has been named a winner in several international competitions including the Artists International Competition and the International Music Competition “Citta di Padova.”

In addition to her classical training, she has a great interest in the music of South America.  Jessica’s CD of South American music for flute, Acentos has been released on the Filarmonika label and is available at www.filarmonika.com.