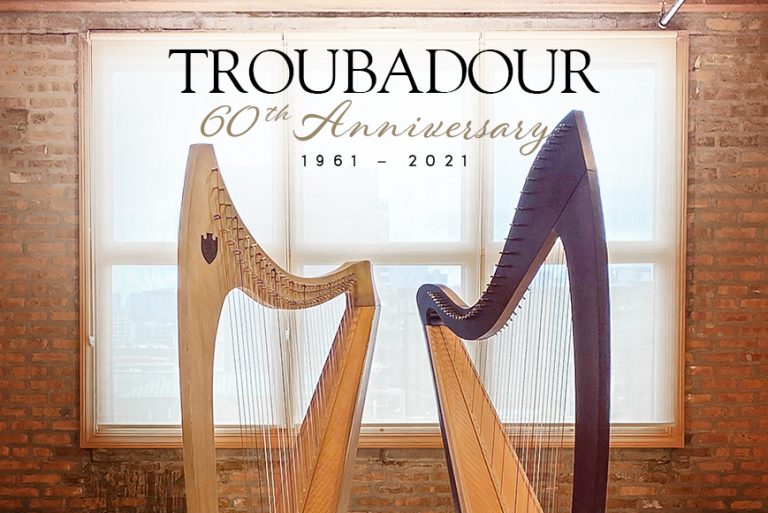 In 1961, twenty-four Troubadour harps were made by Lyon & Healy and placed with teachers throughout the country on a trial basis and were enthusiastically welcomed throughout the harp community.  Designed after the medieval harp, the Troubadour represented a breakthrough in lever harp design, as the instrument featured nearly ¾ the octave range of a full-size pedal harp, could accommodate a broader range of music and had “big harp” string spacing feel and response.  With its lower cost more people could be introduced to the harp through the Troubadour and prove their interest and talent.  This created a resurgence in interest in the harp and further development of the harp world.  Well over 10,000 Troubadours have been built to date, as well as other lever models by Lyon & Healy and other manufacturers, including Salvi.

The Troubadour has always been promoted for in-class or private lessons by a teacher or self-taught with a detailed instruction book.  The Troubadour VI and all Lyon & Healy lever harps are delivered with a copy of Fun from the First Vol. I by Sam Milligan, a pioneer Troubadour teacher.  The Troubadour can be learned readily, a source of happiness and inspiration from the very beginning, whether used for recreation or for introduction to serious musical study.

Thank you to all our Troubadour harpists for the first 60 years!

There have been multiple generations of the Troubadour harp over the years, and we are occasionally asked the dates of manufacture for each: